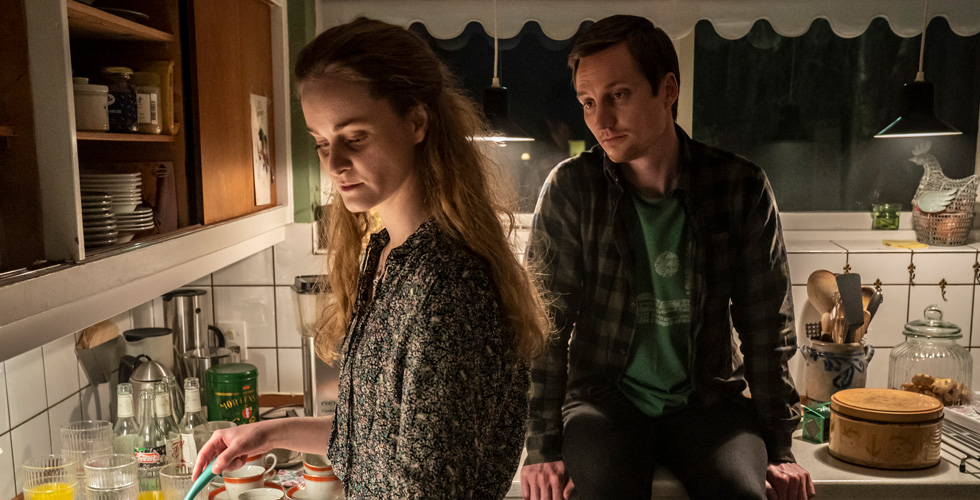 “You eventually have to reinvent yourself as a family, and you cannot know in advance how other family members are going to react”

In Forever, a happy Danish family is shaken by the loss of their adult son, and though this is a remarkably well-functioning group, the surviving members – the father (Ole Sørensen), the mother (Mette Munk Plum) and the sister (Jette Søndergaard) – all process their grief differently, which naturally leads to more pain. Rather than take sides or exploit the tragedy for maximum drama, director Frelle Petersen carefully observes each of his three characters’ slow, almost imperceptible and never complete recovery. We talked to him and Jette Søndergaard at San Sebastián, where the film premiered in competition.

Cineuropa: What was the genesis of the film?
Frelle Petersen: I know a family that lost a son. I went to a party and was speaking to the mother, asking her how they were doing. It had been quite a while since the son died, maybe two years. And I always asked them how they were doing and talked about their son. A little bit later, she said, “Thank you for always asking, I really appreciate that.” It kind of surprised me. We talked some more, and she told me that many people were afraid of talking to her and her husband about their loss, so these people would distance themselves. The family also told me they had struggled to understand one another's way of grieving. So I started doing a lot of research with other families who'd lost a child, and I thought it would be interesting to do something about the people left behind – what it does to you as an individual, but also what that means to you as a family. You eventually have to reinvent yourself as a family, and you cannot know in advance how other family members are going to react.

What was it like playing a character who goes through this?
Jette Søndergaard: I feel very privileged to have helped tell this story. I haven't been through that loss, so I relied on the research Frelle shared with us, and we did some research on our own, too. The three characters grieve differently, and we had to understand exactly what happens to our character. The research showed that there are three distinct ways of grieving, which can often lead to conflicts because, in our state of grief, we do not necessarily have the empathy to accept that the other person is doing something differently to how we are, because we need to be seen and heard ourselves.

How did you maintain consistency in the development of the characters while filming?
FP: The first two weeks of shooting were spent filming everything with the family and the son in the house, chronologically. I think that helped quite a bit. We also talked a lot before shooting. I felt we were all on the same page.

JS: A couple of days before we started shooting, we were allowed to all be in the house and spend the night together, eating and playing games. Just getting into that family feel.

The film is about something horrible, but you don't really have any big, dramatic scenes. Was that a conscious decision, or is this simply how the people you've observed behaved?
FP: A bit of both. I learned during the research that when you lose a young person, you are so hurt that you’re just exhausted. I also don't like to make something dramatic just for the purpose of making fiction. It's really important for me to try and make something as close to real human behaviour as possible. None of the families I talked to said they had fights at crucial moments like this. There’s a scene where the father and the mother argue, but he decides to go down the stairs, and what happens down there, we don't know – if he becomes aggressive, expresses his frustration or starts crying. I didn't want to show these things, because we already know they will happen. I wanted to focus more on the behaviour in the family before and after, to take away some of the more clichéd scenes that we always see in films about grief. In those movies, we also always need to know the cause of death, and I didn't want that either.

How did you work on the pacing of the film?
FP: I realised while talking to these families that usually, within a time frame of about 8-12 months, you would come back to something that would resemble normal life. I thought that if I could tell this story within the space of a year, I would go through the character development that I wanted to portray. I spent more time on what I found most interesting regarding family dynamics. For instance, at some point, the father and daughter become a team, and they start to help one another with their grief. I decided to spend time showing how they managed to move on with their lives, and how the mother isn’t doing those things with them. Instead of something extreme and dramatic that I would feel wasn't real, I wanted to find how the family dynamics from the beginning would change over a year of grieving.