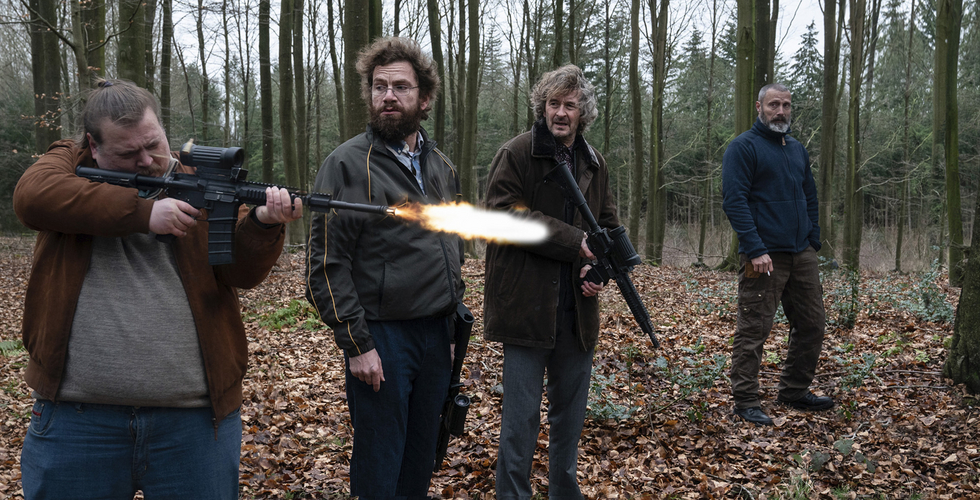 Anders Thomas Jensen, aka the man who gave Mads Mikkelsen a cleft lip in Men & Chicken, to list only one of his many achievements, should really be celebrated much more. Mostly because his is the kind of humour that proves just how dark you can go, and in Riders of Justice, chosen as International Film Festival Rotterdam’s opening film, he perfects the art of first making you laugh out loud, and then making you apologise for it profusely. It must be a Danish thing.

Just giving an inkling of the synopsis here is already, we will admit, surprisingly pleasing, as here comes a story proving that once someone steals your bike for a girl in Estonia, all hell is bound to break loose. Jensen's take on the “butterfly effect”, where a small incident has a huge impact on the future, has Mikkelsen's professional soldier coming home to take care of his daughter after his wife is killed in a train accident. Or maybe, as proposed by some odd data analysts that suddenly come knocking on his door (Nikolaj Lie Kaas and Lars Brygmann), it wasn't an accident at all, because – in short – no one throws away €14 worth of sandwich and juice. Then there are frequent mentions of clubfoot, a guy called Emmenthaler and a claim that fat people look less fat when they are together. It must be what they call love at first viewing.

But while listing its many quirks would make for a perfectly fine pastime (just like with Quentin Dupieux's Mandibles, in this case “normal” is just an illusion), there is actually a lot of raw hurt in the film. There’s bottled-up trauma, grief and a complete lack of guidance when it comes to acknowledging them somehow, best exemplified by Mikkelsen's Markus: a guy with a bit of a temper problem and a troubling lack of awareness of his own strength, smashing through things and noses like a Scandi Hulk, or even awareness of his own child, as instead of helping her heal, he would rather ask if she still runs three times a week. Once the film settles into some sort of idiotic take on Ocean's Eleven, with the guys setting up shop and plotting revenge in a barn as big as an airport, it's still all about trying to find some meaning to what life throws at you, as the mere thought that everything is just a coincidence is far too terrifying to ponder for long.

The only proposed solution, then? Learning how to assemble a rifle, sure, but also staying together. It's funny how, for a filmmaker this peculiar, deep down, Jensen is just a big softie, delighting in showing odd people reaching out to each other in the only way they know how. “It might not be the same, but I loved playing the French horn,” goes one sympathetic statement after someone is visibly hurting, and while it might not be the same, it helps. Especially once you know how to assemble a rifle.

Riders of Justice was produced by Denmark’s Zentropa; its sales are handled by TrustNordisk.