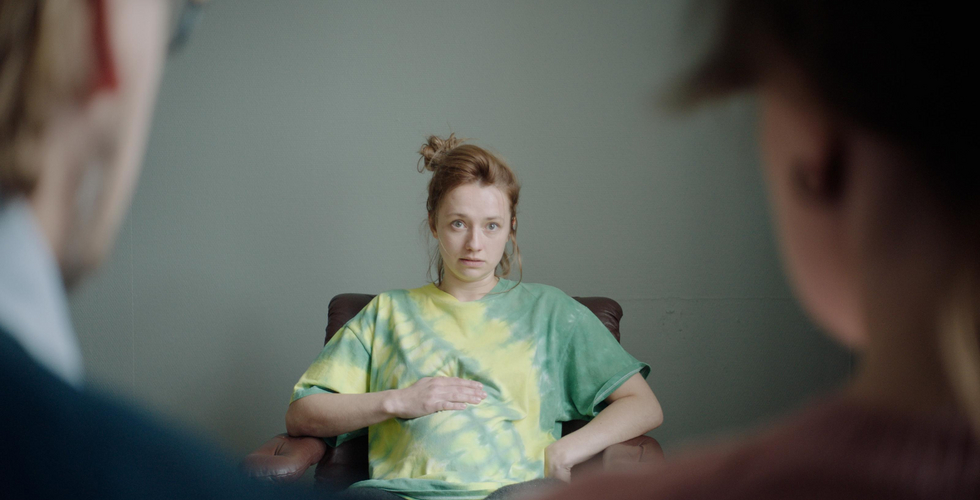 Berlinale: The Norwegian film is selected both at Berlin’s Generation 14plus programme and at Austin’s SXSW’s Film Festival.

Young animator Rakel (23, played by Kristine Kujath Thorp) shares a room with her female BFF and leads a ‘devil may care’ lifestyle. But when she finds out too late she’s six months pregnant after a few casual sex encounters, her life is turned upside down. Her boyfriend - who is not the father - is ok with her having a baby, but Rakel is absolutely not ready to be a mother. Since abortion is not an option, adoption is the only answer. That’s when Ninjababy, an animated character pops up and starts speaking to her and keeps reminding her what a terrible person she is.

The film is written by Home Ground’s Johan Fasting, in collaboration Flikke and novelist/animator Inga H. Sætre, from her own graphic novel Fallteknikk. Co-starring with Kujath Thorp are Nader Khademi, Arthur Berning and Tora Christine Dietrichson.

The film was produced by Yngve Sæther for Motlys, with support from the Norwegian Film Institute and Nordisk Film & TV Fond. Arthaus will handle the domestic release, scheduled for April 16. TrustNordisk handles world sales.

How does it feel to be selected both at the Berlinale and SXSW…although without a live audience?
Yngvild Sve Flikke: It’s amazing. I’m so pleased that the film will be able to reach an international audience. I wish of course I could present the film to a live audience…seeing their reaction is so special. I have also lived in Texas when I was 16. It would have been fun to go back with my film.

Am I correct that you have a lot of experience of working on youth projects for NRK, before going independent?
YSF: I didn’t study at a film school, but NRK was really like a film school for me. I’ve worked there for almost 20 years. It was a wonderful work place. I was allowed to explore different types of media and to work on innovative shows, mostly for youth and young adults. Then I felt it was time to establish myself as an independent filmmaker. Having two children, I’ve also been interested in working on animation shorts for kids.

How did you get involved in the film? Was it Johan Fasting with whom you had worked on Home Ground, who approached you?
YSF: No I actually had the idea before I knew who Johan was! I got it when I was doing the sound mixing of my debut film in 2015. [Women in Oversized Men’s Shirts]. Already then, I wanted to mix animation and live action. I had read Inga H. Sætre’s book and was interested in bringing it to the screen. I wanted to explore the chaotic feeling of being pregnant.

In the book, the main protagonist Rakel is a teenager. We made her older, in her 20s. Inga has also written a fantastic series about a female character-Møkkajentene (Grubby Girls). The humour, style, everything I wanted in the film was there as well. So Inga and I started to work on this project on and off. Then I did two seasons of NRK’s Home Ground where I met Johan. I brought him the material that I and Inga had worked on, for him to finalise the script.

Ninjababy is Rakel’s inner conscious, like kids who have imaginary friends and in fact Rakel is still a big kid herself who just wants to have fun and definitely no responsibility. Did you have the idea of creating the fun animated character Ninjababy from the very start, to bring a touch of humour and slapstick element to the story?
YSF: Ninjababy is one of the beautiful things that Johan added to the story. Inga and I had worked a while on the idea of bringing animation to the story to use it both comically, emotionally, but Johan is the one who came up with this amazing idea.

I love the idea that you can have imaginary talks in your head. This is hard to portray on film, but with animation it was perfect. We made Ninjababy a real grumpy character. We tested a lot both the concept and the voice. We were very pleased to cast Skam actor Herman Tømmeraas for Ninjababy’s voice. He understood the character immediately.

Can you discuss the challenges of introducing the Ninjababy character both to the screenplay and to the visual style?
YSF: Johan gave us the script, then worked on something else. Inga has been my closest collaborator all the way through, to the editing stage.

The film was developed as part of the Norwegian Film Institute’s ‘New Ways’ (Nye Veie) scheme, which allows people to explore their creativity in new challenging ways. We had a tight budget and had to be very precise to where we wanted to use the animation, But Inga skilfully carried the whole animation process. Mikrofilm [Academy-awarded Norwegian animation studio] where she had worked in the past, helped us with the composite, to find the right texture when we put the drawings on top of the live action.

I also contacted the animator of The Diary of a Teenage Girl [2015], Sara Gunnarsdóttir, as the film was a bit what I had in mind with Ninjababy. She gave me some very good advice, such as getting the animator to work as close as possible to the editor, which we did. Inga and our editor Karen Gravås worked wonderfully together.

How would you describe the two male characters Aikido-Mos and Pikkjesus? In a way, they are more ‘heroic’ than Rakel as Aikido Mos supports her through her existential crisis, in a very loving way, while Pikkjesus rises to the new challenge in his life…
YSF: We’ve put a lot of effort to make these characters as human as possible. As with many of my projects, I like to explore gender. I felt it was time to make a story with a nice darling man like Aikido Mos. With Pikkjesus I wanted another character who changes in the course of the story.

Is the film ultimately about taking responsibility?
YSF: Yes the film is really about dealing with challenges. You will fall, you will f..k up, but you need to get on your feet and move on.

Was it hard to find the main actress Kristine Kujath Thorp?
YSF: We wanted to have a fresh face as the character is quite young. With my casting agent Mia Jensen, we tried hundreds of different girls. Then Kristine had sent her tape; I felt I had to meet her. She’s wonderful, lively, emotional. We worked around humour and emotions, as it’s a serious topic, told with humour. She is also an illustrator, therefore drawing was very natural to her. My mum is an artist, so I pay attention to how people hold a pencil in a natural way or not. I just wanted the film to feel authentic.

What’s next?
YSF: Right now, I’m working on a new TV series for NRK, with Johan [Fasting] as show-runner. It’s the political show Makta (Power) about Norway’s former Prime Minister and prominent leader of the Labour Party, Gro Harlem Brundtland. She has meant so much to people of my generation. It’s fascinating, how politics in the late 70s is still relevant today. I will direct several episodes.