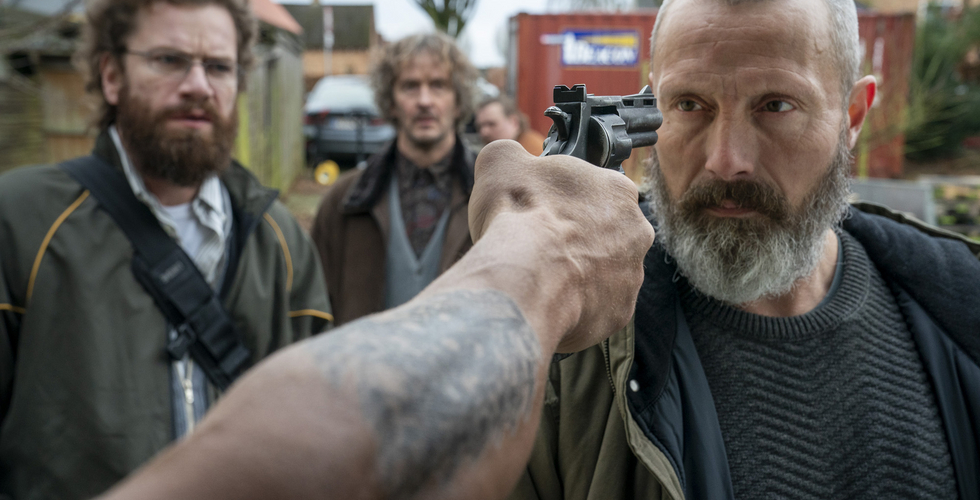 In Danish writer-director Anders Thomas Jensen’s “Riders of Justice,” when Markus (Mads Mikkelsen), a military officer on deployment, receives word that his wife (Anne Birgitte Lind) has been killed in an apparent train accident back home, he returns to an estranged teenage daughter, Mathilde (Andrea Heick Gadeberg), he has no idea how to comfort. Markus’s temperament and training have made him a man of action, not words. He’s at a loss as to what to do next.

Two men show up at his door one night: Otto (Nikolaj Lie Kaas), a mathematician who was a passenger on the same train car as Markus’s wife, and Otto’s friend Lennart (Lars Brygmann), a nebbishy, somewhat skittish hacker. Together, they have done some amateur sleuthing — both the statistical and more conventional kind — and are now convinced that the wreck was no accident but an assassination, based largely on one fact. Also killed: A man who was preparing to testify against the leader of a biker gang (Roland Moller) in a murder trial.

Circumstantial evidence, numbers crunched by Otto and the results of facial recognition software applied to security camera footage — courtesy of Otto and Lennart’s friend Emmenthaler (Nicolas Bro) — all point to a suspect (Omar Shargawi) who, not much later, meets an untimely end after a visit by Markus and his new friends. Soon it’s out-and-out war between the criminal gang and this band of misfit vigilantes.

What in other hands — and, let’s be honest, Hollywood — might have been a straightforward revenge thriller becomes a darkly comic meditation on masculinity, whether toxic or tender. Part thriller in the vein of a Liam Neeson action film, part “Revenge of the Nerds” for grown-ups and part character-driven dramedy about finding a new family in the ruins of an old one, “Riders of Justice” is a carefully crafted — though not always entirely sure-footed — Frankenstein of a film.

Jensen for the most part balances the tonal shifts with skill: “Riders” is violent, but it’s also pretty funny and sweet at times, thanks mostly to the supporting players (two of whom, Kaas and Bro, are being reunited with Mikkelsen after the three appeared together in Jensen’s “Men & Chicken”). Additional zest is brought to the proceedings by Albert Rudbeck Lindhardt, as Mathilde’s sensitive boyfriend, and Gustav Lindh, who plays a gentle Ukrainian sex worker found, half naked and bound, at the scene of Markus’s first crime.

That’s right: first crime. “Riders of Justice” metes out what is intended as vengeance, yet as often as not comes with a questionable approach to morality. The story probes, albeit not terribly profoundly, themes of causality and the randomness of life. Is it a waste of time to pursue tenuous linkages between events, which may or may not have a connection, despite appearances? Otto eventually comes to believe so, despite the almost religious faith he once placed in his beloved algorithms, which he once manipulated to predict human behavior, like an insurance actuary.

Mathilde assesses the situation more simply, explaining to her father that, as many have found — soldiers and civilians alike — it’s not generally healthy to need “someone to be mad at.”

There are plenty of left turns (and the occasional dead end) here, but “Riders of Justice” is no waste of time. The mayhem is mixed with unexpected thoughtfulness. Sometimes the former undercuts the latter, but in the end the spirit of accepting what comes, not avenging the past, survives.

More about the film here.