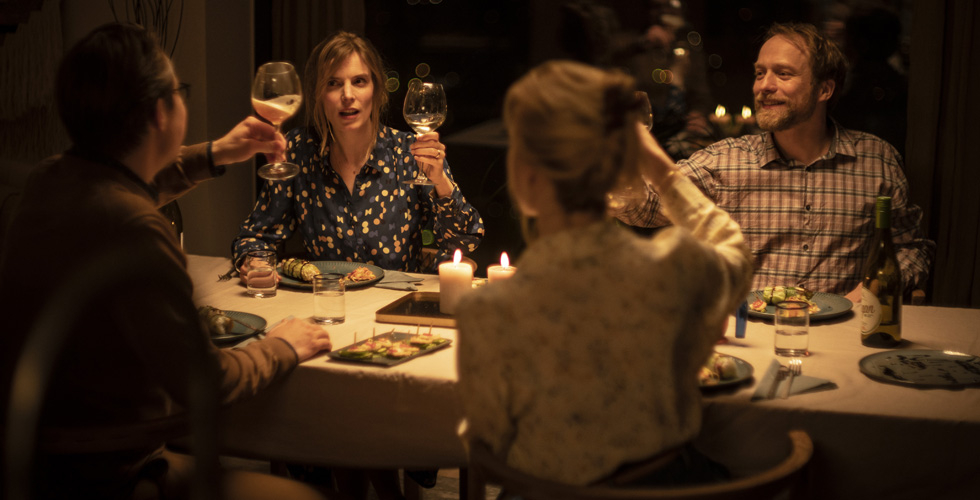 By The Hollywood Reporter / David Rooney

Fast friendships formed during the idyllic getaways of carefree vacations can have a way of souring when reassessed in the starker light of the real world. Though that’s an understatement compared to the blood-curdling horror in store for an innocent Danish family in Speak No Evil, when they reconnect on less neutral ground with a Dutch couple they first encountered amid the rolling green hills of Tuscany. Christian Tafdrup’s satire of how socially conditioned middle-class politeness can dull our self-protection instincts is effective as a startling shot of inhuman cruelty, even if its vicious conclusion is short on psychological illumination.

Acquired out of Sundance’s Midnight section by AMC’s horror platform Shudder for release in North America, the U.K. and Ireland later this year, the film’s elegance makes its savagery even more disturbing. Inching under the viewer’s skin at first with an uncomfortable situation in which affable behavior hides a darkly ambiguous edge, it escalates into nightmarish mayhem that many will find distressing — particularly when its unflinching brutality toward children is exposed.

Tafdrup, who co-wrote this third feature with his brother Mads Tafdrup, opens with a foreboding taste of what’s to come as the headlights of a car drill a tunnel through a darkened woodland road, instantly stoking fear for the two passengers pulled from the vehicle. Sune “Køter” Kølste’s score is almost comically malevolent, even more so when its jagged discordance is heard against tranquil settings like a swimming pool in sun-kissed Italy. That subversive device of slathering ominous music over benign images cranks up the dread throughout.

When Patrick and Karin follow their informal invitation to visit the Netherlands with a postcard, Bjørn and Louise decide to make the day-long journey by car and ferry. But almost as soon as they arrive at the Dutch couple’s isolated countryside home, the guests (as the film is originally titled in Danish) begin to realize they scarcely know their hosts at all.

From the start, Tafdrup suggests the crippling fear of giving offense that can trap people into meekly compliant behavior even in the most unpleasant situations. Bjørn and Louise accept their Dutch acquaintances’ invitation partly out of the sense that it would be rude to refuse. Patrick’s manner veers from patronizing to overbearing, and still, the Danes smile obligingly, even when he insists that Louise, a vegetarian, taste his roast pork. They observe his harsh treatment of Abel with raised eyebrows but remain mostly silent.

Leaving the kids at home with a babysitter (Hichem Yacoubi), the four adults go to a rustic Dutch restaurant where they are the only customers. Their hosts’ uninhibited intimacy during an after-dinner dance makes Bjørn and Louise uncomfortable, but only when Patrick drives home recklessly with music blaring does Louise voice her objections. When Patrick and Karin cross parental boundaries with Agnes, Louise insists they leave immediately. But their exit plan goes awry, leaving the guests, in an extremely awkward confrontation, to stammer through a vague explanation of all the little things that have felt wrong since their arrival.

Their decision to stay on stretches credibility a bit, but Tafdrup provides some psychological ballast by making Bjørn a quiet mess of insecurity and depression. He makes the mistake of opening up to Patrick about his gnawing dissatisfaction and the suffocating fatigue of maintaining a fixed smile. But their consequent male bonding is revealed to be flimsy once Patrick loses his temper with Abel in a shocking display of rage.

The director’s unerring control makes the film a gripping experience of sustained queasiness that spirals into heightened alarm as Bjørn and Louise’s second attempt to get away fails and the scenario shifts from menace to outright evil.

While the psychotic nastiness here is a much more slow-burn affair, there are frequent hints of the influence of Michael Haneke’s original Funny Games. The degree of sadism manifested in Patrick’s violence and Karin’s icy calm makes the climactic action play like arthouse torture porn — perhaps with less substance than meets the eye. But strong performances from the four leads, plus the film’s unsettling visuals and crafty use of score, sound and strategic silence make it both a tough watch and impossible to look away from. Seeing Bjørn and Louise’s faces dissolve from passive uneasiness to abject terror is bone-chilling stuff.