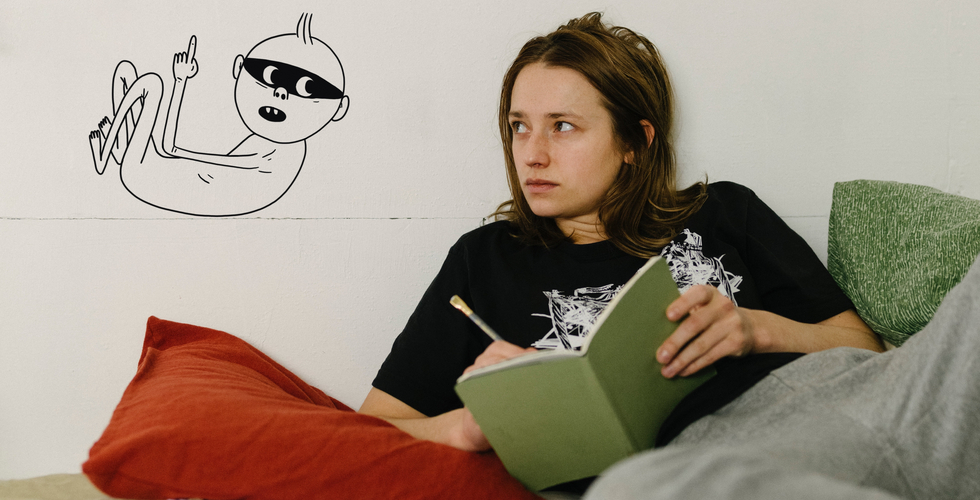 “Sperm, that shit sucks,” says Rakel (Kristine Kujath Thorpe) at the opening of the raucously funny Norwegian comedy Ninjababy. The line immediately sets an irreverent tone to its treatment of a subject, unwanted pregnancy, which is otherwise either treated as winsome comedy – as in Jason Reitman’s Juno (2007) – or gritty tragedy, as in Eliza Hittman’s Never Rarely Sometimes Always (2020). For Rakel, the issue of getting an abortion is a no-brainer, until she is informed that the eponymous foetus has already been gestating in her womb for six months with ninjitsu stealth.

Twentysomething Rakel likes sex, beer and drawing cartoons; what she doesn’t like is the idea of being a mum. With her options severely limited – and once she’s stopped loudly demanding that she still get an abortion – Rakel bickers with a cartoon manifestation of the baby (drawn by Inga Sætre, whose graphic novel Fallteknikk inspired this film, Yngvild Sve Flikke’s second feature). The little cartoon Ninjababy is as amusingly obnoxious as Rakel, hilariously unimpressed by its own father: “Did you really let that fuck you?” it sneers of the man Rakel refers to as Dick Jesus (Arthur Berning).

Co-screenwriters Sætre and Johan Fasting load the script with a wealth of laugh-out loud wit and some great physical comedy. Kujath Thorpe plays Rakel as full of energy and fun, brash and mischievous, utterly forgoing the conventional trajectory of unwilling mother coming to some revelation of maternal instinct. Not that Rakel is indifferent to the baby’s fate: in a wonderful scene she sneaks into an adoption class and is soon calling out the potential parents as racists for requesting Norwegian babies. But she has ambitions, dreams and a frankly selfish wish to enjoy herself, none of which includes motherhood.

There’s a bracing frankness to the film; Rakel is extremely likeable in her refusal to be conventionally likeable. For male comedy heroes this has been a staple since Charlie Chaplin, but Ninjababy joins such recent fare as Phoebe Waller-Bridge’s Fleabag in carving out some gender parity.

Flikke brings a zip to proceedings, including the kind of comedy flashbacks familiar from television and Edgar Wright films. But she also allows the essentially farcical proceedings to gather pace in their own time, and Marianne Bakke’s naturalistic cinematography keeps everything grounded in a recognisable reality.

The animated Ninjababy doesn’t dominate – this is no Look Who’s Talking (1989) – and the animation is organically part of Rakel’s way of looking at the world. When she’s depressed, scribbles blot out people’s faces; when she falls in love, a little glimmer illuminates the moment.

Most impressively, Yngvild Sve Flikke’s film sticks to its convictions. Conventional narratives are so burned into our psyches that it comes as a genuine shock to have a character and a film steadfastly refuse any flicker of maternal instinct. A bold and refreshing comedy, Ninjababy is not only funny, it’s true.