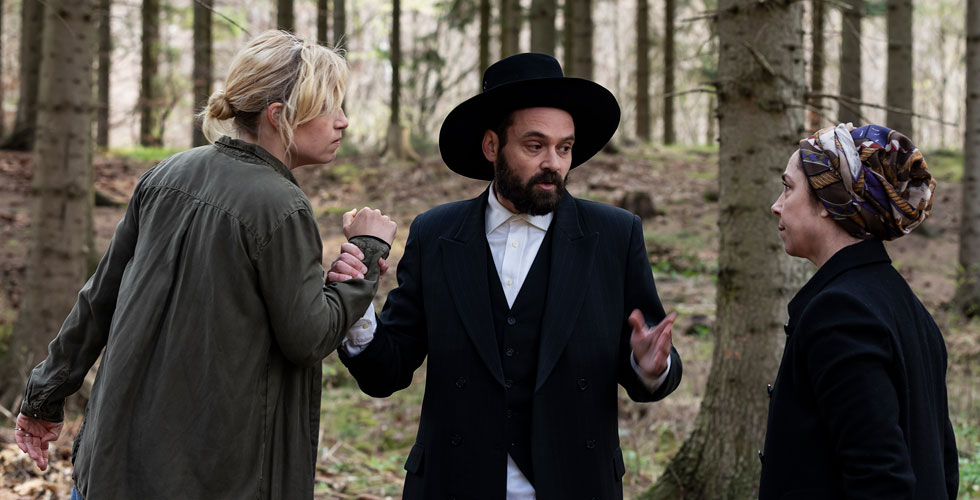 Starting with a brightly-coloured meet-cute in a library and ending up with a terrifying paranormal confrontation in a dank attic, Attachment is quite the unexpected journey yet, making his feature debut, writer/director Gabriel Bier Gisalson (son of acclaimed Danish filmmaker Susanne Bier), navigates the twists and turns of his dark romance with skill. Featuring a trio of strong female characters, and mixing familiar horror tropes and family tensions with less widely-known religious mythology, this story of a new couple whose burgeoning relationship is threatened by an overbearing mother is sharp in both its observations and its genre elements.

That in itself is likely enough to secure further festival interest following its premiere in Tribeca’s Midnight screenings, and an appreciative audience when it arrives on Shudder in territories including the UK and North America. Despite its very specific setting, international viewers should respond to its genuine chills and sensitive use of religious traditions in a similar vein to Keith Thomas’ The Vigil or Romola Garai’s Amulet. (It is also reminiscent of Natalie Erika James’ Relic in its exploration of how the behaviours of an older generation cast shadows over the young.)

The initial meeting between has-been Danish actress Maja (Josephine Park) and English student Leah (Ellie Kendrick) is intentionally romcom-cute; dressed as an elf, Maja is rushing through a library on her way to entertain some kids when she runs headlong into Leah. The sparks fly along with the books, and the pair spend a passionate night together. Their attraction is strong, and it’s not long before Leah is cancelling her trip back to England — and ignoring multiple calls from her mother. One night, however, Leah breaks her leg during a terrifying seizure which forces her to head home, a love-struck Maja in tow.

Home for Leah is the Hasidic enclave of Stamford Hill, North London, where she lives with her mother Chana (Sofie Grabol) in a terraced house converted into two flats, one for each of them. That late-20s Leah still lives with mum is not initially a red flag, particularly in this age of spiralling housing costs, but in the claustrophobic confines of her dark, wood-panelled home — a world away, both stylistically and ideologically, from Maja’s bright, relaxed Scandinavian apartment — the film begins to change its shape.

Chana is fiercely Orthodox in her faith, putting great stock in tradition and superstition which effectively creates a bubble around herself and her daughter which Maja struggles to permeate, despite her best efforts. The need to understand leads her to a local book shop run by Maja’s uncle (a wonderfully dry David Dencik), where she is exposed to Jewish beliefs such as the golem (an inanimate object brought to life to defend the Jewish faith) and the Dybbuk (a malevolent spirit who possesses a living body).

With these ideas festering in her head, Maja becomes convinced that something is not right in Chana’s house — where the floorboards creak, lit candles appear at the end of the bed and piles of salt are hidden in every corner. In particular, she becomes concerned about Chana, whose desire to care for her adult daughter seems to tip into dangerous obsession and hints at possible mental illness. Convinced that Leah is in danger, Maja takes her to the peaceful isolation of rural Denmark — and it is there that all hell really breaks loose.

Despite these themes, Gislason resists the urge to go full-tilt with the horror. He keeps things intimate in scale, trades in creeping dread rather than all-out scares, and the film is all the more effective for that approach. The tension builds naturally in this insular environment, in which blind faith can be as much of a curse as a blessing and community can mean both acceptance and isolation. Sensations permeate, rather than being compounded with overbearing musical cues — although sound design is particularly effective — or obvious jump-cut edits.

Those tools aren’t needed when the screenplay is as strong as this and, ultimately, Attachment is so successful because it keeps its focus on the shifting dynamics between Maja, Leah and Chana — fascinating, nuanced characters played with restraint and skill. It’s also notable that the girls’ sexual orientation is treated simply as one of the film’s multiple textural details; instead, Chana’s animosity is a direct result of her desire to keep her daughter closeted within the supposed sanctuary of her faith for reasons that will become desperately clear.