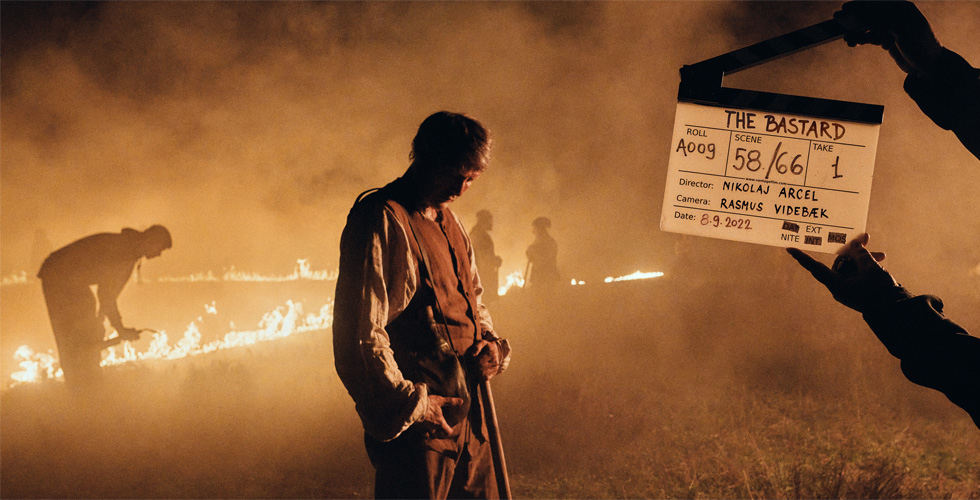 The Danish production powerhouse Zentropa has today revealed the full cast of internationally acknowledged director Nikolaj Arcel’s new epic period drama THE BASTARD (previously known as the working title KING’S LAND). The cast is revealed together with the first behind-the-scenes footage of the film currently in production.
In addition to Mads Mikkelsen and Amanda Collin in the lead, the drama will feature Simon Bennebjerg, Gustav Lindh, Kristine Kujath Thorp, Magnus Krepper and Morten Hee Andersen, among others.

It was previously announced during Cannes that world-renowned actor Mads Mikkelsen (FANTASTIC BEASTS: THE SECRETS OF DUMBLEDORE, 2022; ANOTHER ROUND, 2020) and talented actress Amanda Collin (RAISED BY WOLVES, 2020-22) would play the impoverished Captain Ludvig Kahlen and the vigorous and mortified Ann Barbara, respectively, and today, we are delighted to disclose the full cast.

Scandinavian star talents to play opposite Mikkelsen and Collin
The cast includes a wide range of talented artists, including Simon Bennebjerg (BORGEN, 2022; THE PACT, 2021) who will play the Frederik de Schinkel, the local landowner and nemesis to Mads Mikkelsen’s character Ludvig Kahlen.

Talented Norwegian actress Kristine Kujath Thorp will play Frederik de Schinkel’s cousin Edel Helene, trapped in a deadly game between Shinkel and Kahlen of power and love. Kujath Thorp previously starred in the Berlin and SXSW-winning dramedy NINJABABY (2021) and most recently can be seen in the Cannes-selected feature SICK OF MYSELF (2022) and the San Sebastian-selected drama THE GREAT SILENCE (2022).

Global interest in Arcel’s new periodic drama
Estimated to be one of Zentropa’s biggest feature films in years and with a budget of EUR 8M, the feature has already received massive attention within the industry and pre-sold to the US (Magnolia Pictures), Germany (PLAION PICTURES), France (The Jokers Films), Benelux (September Films) and Hungary (Vertigo Media), underlining the immense attention that the film has already received from the industry.
The new project is scripted by Arcel together with critically acclaimed Danish screenwriter and director Anders Thomas Jensen (RIDERS OF JUSTICE, 2020) and is based on the Danish bestseller ‘Kaptajnen og Ann Barbara’ (translated ‘The Captain and Ann Barbara’) from 2020. Produced by Louise Vesth for Zentropa Entertainments.

Arcel’s screen adaptation will be a gripping drama about the conquest of the Danish heath. About unremitting nature, big dreams and even bigger sacrifices. About revenge and discipline, love and loss. A story of a proud and uncompromising man and the woman who becomes his ally in the fight against evil, death and perdition.

Synopsis:
In the mid-1700s, Danish King Frederik V declared that the wild heath of Jutland should be tamed, cultivated, and colonized so that civilization could spread and new taxes be generated for the royal house.
However, no one dared to follow the King’s decree. The heath meant certain death – a godforsaken place haunted by ravenous wolves, highwaymen, and a brutal and unforgiving nature.
But in the late summer of 1755, a lone soldier by the name of Ludvig Kahlen rode into the heath in a stubborn pursuit of a lifelong dream, determined to reach his goal: The heath would either bring him the wealth and honour he had long seeked… or get the better of him.

THE BASTARD is currently shooting in Denmark, Germany and the Czech Republic and is expected to have its local release in autumn 2023.