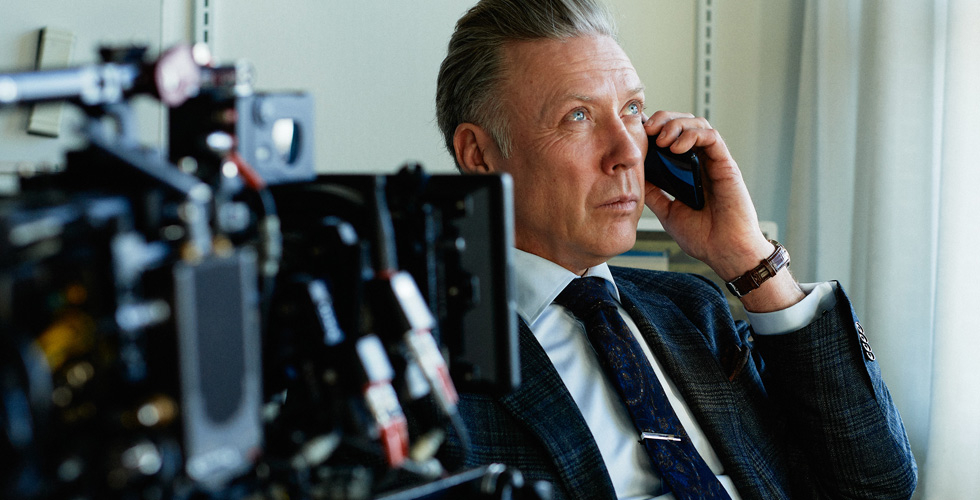 Internationally acknowledged Swedish actor Mikael Persbrandt and actress Tuva Novotny will star in the final season of Lars von Trier’s cult series THE KINGDOM together with Primetime Emmy Award-winning Alexander Skarsgård and David Dencik, who will both star as guests.

Zentropa, NENT Group and DR now present additional prominent cast members to star in Lars von Trier’s THE KINGDOM EXODUS; the third and irrevocably final season of the legendary series about good and evil at the main hospital in Copenhagen, Rigshospitalet, also known as The Kingdom.
The new cast members include Mikael Persbrandt, Tuva Novotny, Ida Engvoll, Asta August and last but not least Alexander Skarsgård and David Dencik as guest stars.
The skewed relationship between Denmark and Sweden, that started in the first two seasons of the series, reaches new heights in THE KINGDOM EXODUS. The Swedes at the hospital have united and formed the discussion group SA (Swedish Anonymous), in which they secretly meet in the dark cellars of The Kingdom to express their frustrations over the jovial and arrogant behavior of the Danes. As things unfold, a revolt sprouts in the group.

Persbrandt returns to Denmark
The major Swedish celebrity Mikael Persbrandt (SEX EDUCATION, 2019-21; THE GIRL IN THE SPIDER’S WEB, 2018; THE HOBBIT, 2013-2014; IN A BETTER WORLD, 2010) is back in Denmark to star in the Danish production as chief physician Helmer Jr, the son of the former legendary and notorious Danish-hating Swedish chief physician Stig Helmer. Helmer Jr is also referred to as Halmer because the chief physician in charge, Pontopidan, played by Lars Mikkelsen, believes that half a Helmer equals one Halmer.

Award-winning Tuva Novotny to star in the series
The cast will also include San Sebastian Silver Seashell-winning actress Tuva Novotny (BLINDSPOT, 2018, ANNIHILATION, 2018; A WAR, 2016), who will play the role as the physician Anna in charge of supervising her colleagues and making sure that everything goes according to plan.

The Skarsgård name remains in The Kingdom
Internationally praised Swedish actor Alexander Skarsgård will guest star as an attorney at The Kingdom, a role he has inherited from his father, Stellan Skarsgård, who also played an attorney in the second season of the series.
Alexander Skarsgård has already worked with Lars von Trier on MELANCHOLIA (2011) and had his Hollywood breakthrough a few years ago with his role in the cult series TRUE BLOOD (2008-14) and smash hit series BIG LITTLE LIES (2017-19), in which he played the role as the villain Perry Wright. The latter also secured him a Primetime Emmy Award in 2017. Skarsgård also played the lead in GODZILLA VS KONG (2021) and will soon appear in the third season of the popular drama series SUCCESSION (2021).

David Dencik - 15 years of acting in Denmark and Hollywood
Danish-Swedish actor David Dencik will too make a guest appearance in THE KINGDOM EXODUS, in which he will play the role as Bosse, the leader of the Swedish Anonymous.
Dencik has starred in just about 100 features and series within the last 15 years, including A ROYAL AFFAIR (2012), THE SNOWMAN (2017), Spielberg’s Oscar®- and Golden Globe-nominated WAR HORSE (2011), Oscar®-nominated TINKER TAILER SOLDIER SPY (2011) and critically acclaimed drama series TOP OF THE LAKE (2013) and CHERNOBYL (2019). He will soon star in the THE CHESTNUT MAN (2021) and as the next James Bond villain in NO TIME TO DIE (2021).

Synopsis
Heavily influenced by the ghostly series THE KINGDOM, the sleepwalker Karen seeks answers to the unresolved questions of the series in order to save the hospital from doom. Sound asleep one night, Karen wanders into the darkness and inexplicably ends up in front of the hospital. The gate to the Kingdom is opening…

With THE KINGDOM EXODUS, Lars von Trier continues and finishes his internationally acclaimed 1990s cult series-classic: The ghost stories about the hospital built on top of the old bleaching ponds in Copenhagen, where evil has taken roots and the medical science faces a daily struggle with itself, where the Swedes curse the Danes and the mysterious and inexplicable blend together in a mixture of horror and humor.

Lars von Trier has written the script in collaboration with Niels Vørsel, with whom he also wrote the previous seasons. Louise Vesth is producing for Zentropa Entertainments with NENT Group and DR co-producing.

In connection with the production of THE KINGDOM EXODUS, season I & II has undergone a thorough restoration, enabling all three seasons to be launched as a whole in the highest possible quality for both old and new fans.
THE KINGDOM EXODUS will consist of five episodes with an approximate duration of 60 minutes each and is expected to premiere in 2022.

LARS VON TRIER’S ”THE KINGDOM EXODUS” is presented by VIAPLAY and DR. Produced by ZENTROPA ENTERTAINMENTS in co-production with FILM I VÄST, ZENTROPA SWEDEN and GINGER PICTURES. With support from NORDISK FILM & TV FOND and tax shelter provided by BNP PARIBAS FORTIS FILM FINANCE and developed with the support of THE CREATIVE EUROPE MEDIA PROGRAMME OF THE EUROPEAN UNION. International sales TRUSTNORDISK.