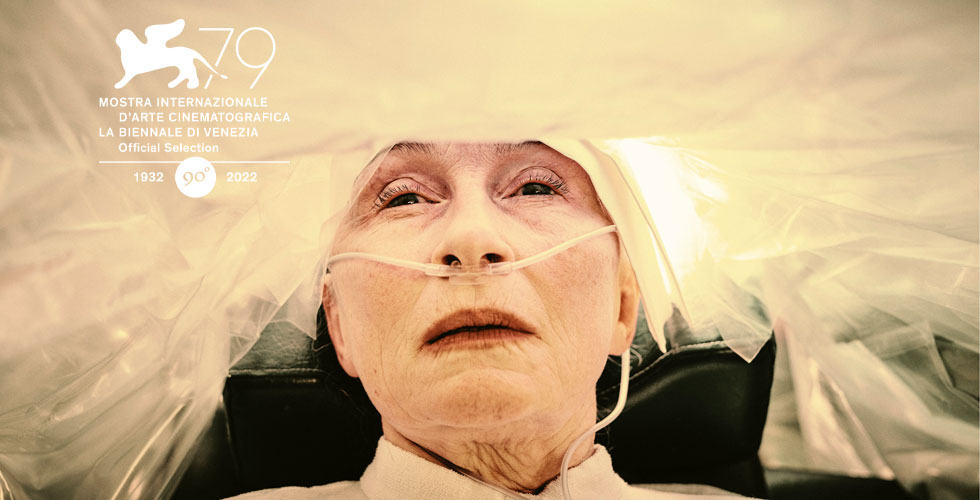 Venice International Film Festival has just announced its official selection for this year’s exclusive line-up, and we are proud to share that the highly anticipated cult series THE KINGDOM EXODUS by Lars von Trier has been selected for 'Out of Competition', where it will have its world premiere (31 August – 10 September 2022).

Copenhagen, 26 July 2022 – The 79th Venice International Film Festival just announced its official selection which includes Lars von Trier’s THE KINGDOM EXODUS, the third and final season of his epic cult series THE KINGDOM, which has been highly anticipated among the international audience.
The Zentropa-produced series will world premiere within the section 'Out of Competition' for which a special cut has been prepared, enabling the series to be screened as a five-hour-long film version.

This will be the third time for Lars von Trier to have his work selected for the Biennale di Venezia, one of the world’s biggest and most prestigious festivals. In 1997, THE KINGDOM series was officially selected for the festival, and in 2014, his wild and controversial drama NYMPHOMANIAC was selected to world premiere within the festival's 'Out of Competition' section.

Producing the series is Louise Vesth for the Danish production powerhouse Zentropa, who comments on the outstanding selection:
‘This is it. How amazing that The Kingdom Exodus has been invited for Venice. They screened The Kingdom in the past, and now the circle will be completed at this beautiful festival. Venice will be the perfect scene for the world premiere of Lars von Trier’s wild piece of art about good and evil.’

A long-awaited series locally and internationally
Not only has the mystery drama series been widely popular among the audience in von Trier’s homeland, it has also been highly anticipated globally with several territories already sold, including Benelux (September Films), Germany and Austria (Koch Films), Spain (Filmin), Czech Republic and Slovakia (Aerofilms), Japan (Synca Creations) and South Korea (AtNine), that have all acquired the full trilogy.

Managing Director of TrustNordisk, Susan Wendt, comments on the selection:
‘We are beyond thrilled to have the series in Venice at one of the most prestigious film festivals in the world, which seems like the perfect place to celebrate its world premiere. The international interest in the series has been immense from the very beginning and still is. We congratulate the entire team on this huge achievement and can’t wait for it to be screened to audiences worldwide.’

A star-studded international cast
THE KINGDOM EXODUS will star an exciting range of characters from the earlier seasons and new cast members. The cast comprises Emmy Award-winning actor Lars Mikkelsen (DEVILS, 2020-22; THE WITCHER, 2019-21;  RIDE UPON THE STORM, 2017-18), Nikolaj Lie Kaas (RIDERS OF JUSTICE, 2020), internationally acknowledged actor Mikael Persbrandt (SEX EDUCATION; 2019-21; THE HOBBIT, 2013-14; IN A BETTER WORLD, 2010) and Tuva Novotny (BLINDSPOT, 2018) together with David Dencik (NO TIME TO DIE, 2021; CHERNOBYL, 2019) and Primetime Emmy Award-winning Alexander Skarsgård (SUCCESSION, 2021; BIG LITTLE LIES, 2017-19) who will guest star in the series.

Synopsis
Heavily influenced by the ghostly series THE KINGDOM, the sleepwalker Karen seeks answers to the unresolved questions of the series in order to save the hospital from doom. Sound asleep one night, Karen wanders into the darkness and inexplicably ends up in front of the hospital. The gate to the Kingdom is opening once more...
With THE KINGDOM EXODUS, Lars von Trier continues and finishes his internationally acclaimed 1990s cult series classic: The ghost story about the hospital built on top of the old bleaching ponds in Copenhagen, where evil has taken roots and the medical science faces a daily struggle with itself, where the Swedes curse the Danes, and the mysterious and inexplicable blend together in a mixture of horror and humour.

Lars von Trier has written the script in collaboration with Niels Vørsel, with whom he also wrote the previous seasons. Louise Vesth is producing for Zentropa Entertainments with NENT Group and DR as co-producers.
In connection with the production of THE KINGDOM EXODUS, seasons I & II have undergone a thorough restoration, enabling all three seasons, 13 episodes in total, to be launched as a whole in the highest possible quality for both old and new fans.


Lars von Trier’s THE KINGDOM EXODUS is presented by VIAPLAY and DR. Produced by ZENTROPA ENTERTAINMENTS in co-production with FILM I VÄST, ZENTROPA SWEDEN and GINGER PICTURES. With support from NORDISK FILM & TV FOND and tax shelter provided by BNP PARIBAS FORTIS FILM FINANCE and developed with the support of THE CREATIVE EUROPE MEDIA PROGRAMME OF THE EUROPEAN UNION. International sales are handled by TRUSTNORDISK.

THE KINGDOM EXODUS will launch locally in fall 2022 on Viaplay’s platform and will subsequently have its TV premiere on the Danish broadcast service DR.