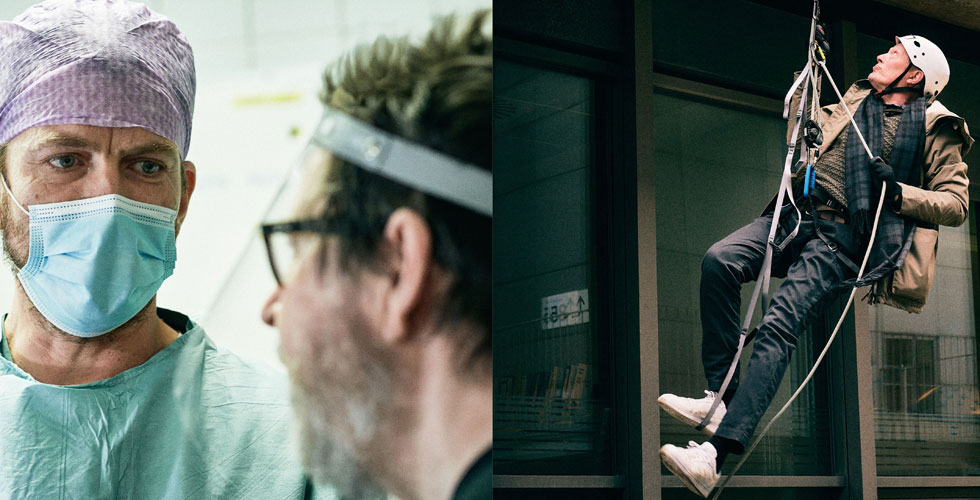 Two major names have been cast to star in the third and final season of Lars von Trier’s ground-breaking hospital series THE KINGDOM. Shooting will take place on location and in a studio until the end of summer.

We are pleased to announce that Zentropa, NENT and DR have just confirmed Lars Mikkelsen and Nikolaj Lie Kaas as part of the cast of Lars von Trier’s legendary series THE KINGDOM. The two major names will both be starring in THE KINGDOM for the first time and are added to a cast of Danish heavyweights, including Bodil Jørgensen, Ghita Nørby, Nicolas Bro, Søren Pilmark og Peter Mygind, who have already been announced.

Lars Mikkelsen as the chief physician
Lars Mikkelsen is cast as chief physician Pontopidan, who is extremely afraid of conflicts and hardly requires any further introduction. For more than 25 years, Lars Mikkelsen has captivated the Danish audience with roles in film, TV and in theatres, including his memorable contribution in the films HEADHUNTER (2009) and THE DAY WILL COME (2016) as well as drama series THE SPIDER (2000), THE KILLING (2007) and 1864 (2014).

In recent years, he has established quite an impressive international career with roles in major drama series such as HOUSE OF CARDS (2015-2018), THE WITCHER (2019) and DEVILS (2020).

Kaas reunites with Trier
Cast as the burnt out resident Filip Naver, Nikolaj Lie Kaas is reuniting with Lars von Trier for the first time since THE IDIOTS (1998). Since his breakthrough 30 years ago in THE BOYS FROM ST. PETRI, he has become one of Denmark’s biggest stars with leads in a long line of both critically acclaimed films and audience favourites. Among these are the four popular Department Q titles, THE PURITY OF VENGEANCE (2018), A CONSPIRACY OF FAITH (2016), THE ABSENT ONE (2014) and THE KEEPER OF LOST CAUSES (2013), director Anders Thomas Jensen’s latest success RIDERS OF JUSTICE (2020), as well as BROTHERS (2004) and OPEN HEARTS (2002) by Susanne Bier.

Furthermore, he has starred in the star-studded Dan Brown blockbuster ANGELS & DEMONS (2009), HBO’s international success series BRITANNIA (2017-2019) and local drama series such as FOLLOW THE MONEY (2016) and THE KILLING (2012).

Synopsis
Heavily influenced by the ghostly series THE KINGDOM, the sleepwalker Karen seeks answers to the unresolved questions of the series in order to save the hospital from doom. Sound asleep one night, Karen wanders into the darkness and inexplicably ends up in front of the hospital. The gate to the Kingdom is opening again…

In connection with the production of THE KINGDOM EXODUS, season I & II have undergone a thorough restoration, enabling all three seasons to be launched as a whole in the highest possible quality for both old and new fans.