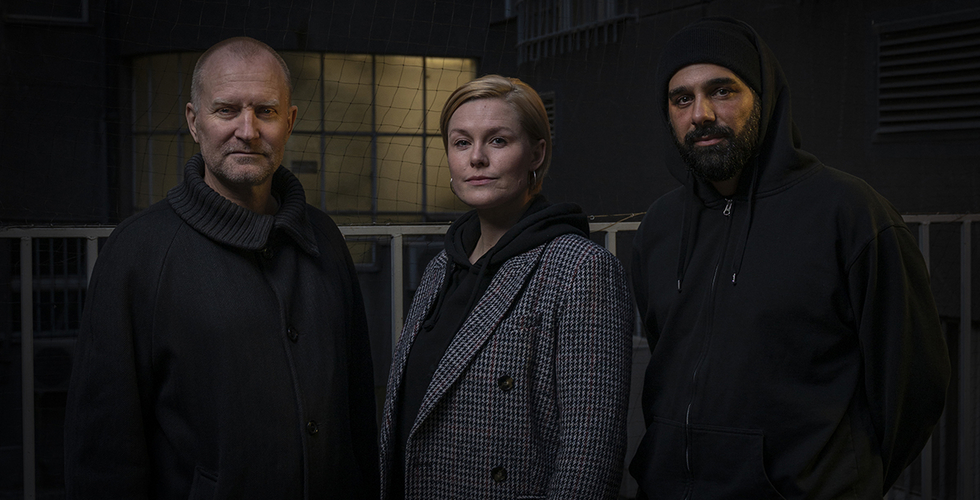 The Oscar-nominated director discusses his fourth Danish feature film, which opens May 27 in Danish cinemas via Nordisk Film.

After the critically acclaimed Applause (2009), A Funny Man (2011), the Oscar-nominated Land of Mine (2015) and Netflix’s English-language The Outsider (2018), Martin Zandvliet takes on the challenge of bringing back to the silver screen the popular Department Q crime series.

Based on Danish author Jussi Adler-Olsen’s fifth book in the series, The Marco Effect is also the first of a reboot version produced by Nordisk Film, with five other film adaptations to be made.

Ulrich Thomsen and Zaki Youssef star as buddy cops Carl Mørck and Assad, previous played by Nikolaj Lie Kaas and Fares Fares in the first Department Q films (The Keeper of Lost Causes, The Absent One, A Conspiracy of Faith, The Purity of Vengeance) produced by Zentropa, which were all major box office hits.

The Marco Effect was adapted for the screen by Zandvliet’s usual collaborator Anders Frithiof August, together with Thomas Porsager.

In the film, detective Carl Mørck (Thomsen) and his Department Q team are investigating the case of a teenage homeless gipsy boy named Marco, arrested at the Danish border, with the passport of a missing public servant. The latter was accused of pedophilia shortly before his disappearance, and his case was closed - unusually - very fast. But the silent, traumatised Marco refuses to talk. He manages to escape, but a brutal gang is after him. Mørck soon uncovers that Marco is the key to uncovering a story of multinational corruption on government funds earmarked for development aid in Africa.

The film was produced by Mikael Rieks for Nordisk Film, in co-production with Peter Nadermann of Nadcon Film and ZDF in Germany, with co-financing from YouSee, TV2 Denmark, support from the Danish Film Institute, and Nordisk Film & TV Fond. TrustNordisk has pre-sold the film to several territories including Spain (Vertigo), Hungary (Vertigo Media), Slovakia and the Czech Republic (Aero Films).

What was your first reaction when you were offered to direct a new film based on the successful Department Q franchise?
Martin Zandvliet: It was a bit daunting as the previous films have been huge successes, I knew that Nikolaj [Lie Kaas] and Fares Fares wouldn’t be involved in this film. But the plan was always to have a new take on the franchise, with a more linear storyline, less flashbacks. So yes, it was a bit scary, but then, who doesn’t like a good challenge?

The crime genre functions as a barometer of a society's values and morals. Is this also an aspect that interested you?
MZ: Definitely, I love watching crime. It’s my favourite entertainment at home. That said, here the film is not realistic. It’s pure fiction, based on a book. What interested me was both the father and son story - around Marco and his father -, a theme that I always enjoy tackling in my films, as well as Carl Mørck’s personal journey. He is married to his job, but is he able to have a life outside the police station? I wanted to go deeper into his character, look inside of him.

At what point did you join the team?
MZ: I came in late in the writing process and then changed whatever I felt needed to be changed, regarding the plot and characters. It’s always a fine balance when you have to adapt books that are further on in the process. You’re not allowed to reveal stuff you might want to. Still, it was a great experience to collaborate again with Anders Frithiof [co-writer of Applause and A Funny Man]. He sometimes writes scenes that he knows I enjoy directing!

Jussi [Adler-Olsen] was also involved. He read the script several times and discussed with us what to reveal or not. He is well aware that film adaptations have a life of their own. It’s a new beginning in a sense for his characters and universe.

And I believe you have taken a few liberties in the film version with many shortcuts to the action…
MZ: As we had a new set of actors, we wanted to establish the new Carl, get straight into his world, instead of focusing for instance on Carl and his friendship with Assad. We therefore needed to change part of the story and add other stuff that would be relevant both for the readers and cinemagoers.

The Department Q series relies partly on the chemistry between Carl Mørck and Assad. Can you explain how you set your choice on Ulrich Thomsen and Yaki Youssef who take over from the cop duo played by Nikolaj Lie Kaas and Fares Fares?
MZ: The casting was a collaboration with the producers. In Denmark, we have a finite number of stars, and we needed actors who hadn’t been in the previous Department Q films. We felt Ulrich [Thomsen] would be perfect as the complex, introverted Carl.

Regarding Yaki Youssef, his character Assad will be developed in the following films. His role here in a way is to ‘clean up’ after Carl.

What were your stylistic influences? I really appreciated the numerous close ups from the very start …
MZ: I am in love with faces and love close ups. If I could I wouldn’t cut away at all! It’s a plot-driven genre, but I wanted to make it character-driven as well, establish Carl and his universe in the first 20 minutes. The only way was to be as close as possible to him with the camera. I shot the film with cinematographer Aske Alexander Foss. We have the same taste. He doesn’t focus too much on the framing, but sees if you can fall in love with the character first.

I believe the partly shot in the Czech Republic...
MZ: Yes. We built the police station in a studio in Prague. It was a very good experience…until the pandemic struck. We had three-four weeks left of shooting. We all started to talk about Covid-19 and to feel unsafe. It was very unsettling. Overnight, the airport, restaurants, hotels-everything shut down. We had to find cars to drive home - it was very hectic. We didn’t know if we could get into Denmark. Once in Copenhagen, we found new locations, re-wrote the script - as the ending was originally meant to be set somewhere in Africa. Ultimately it became a better movie.

The Gypsy boy who plays Marco was perfect for the part. How did you find him?
MZ: I watched a lot of boys for the part but as soon as I saw a photo of Luboš Oláh, I immediately fell in love with his face. I said who is he? The casting people said, well he has no experience and can only speak Czech Romani. I insisted. They eventually showed me a video with him. I watched it with my daughter (13). She said you have to have this guy! He has something special, so I did. The cast around him are all from the same village in the Czech Republic. We were also lucky to have a great translator who was fantastic with Luboš and all Czech actors. It was a very good work experience there. People are generous and hard workers.

Editing is where you come from. Is it still one aspect of the filmmaking process that you enjoy most?
MZ: You always try to evolve. Editing helps me. When on set, I’m very calm as I know exactly when I have what I need to tell the story. I don’t shoot very much, I don’t have many takes, many angles. The writing helps as well. I know that if you get in trouble, you can re-write on set. Visually, working with my wife [cinematographer Camilla Hjelm], watching movies all the time is inspiring to find a visual concept or style that fits different films.

I also watch a lot of documentaries, where characters are everything. You have one take and it still draws you in. Cassavetes is one of my ‘heroes’. A Woman Under the Influence is still my all-time favourite movie. It’s shot with a true love for the characters and acted with love.

Thomas Vinterberg, Anders Thomas Jensen are doing extremely well both in Denmark and internationally. Is it exciting for you to contribute to this wave of auteur/directors that reach out wide?
MZ: They are different filmmakers and the audience embraces that, which is fantastic. Then you have Susanne Bier who has taken over the world. There are a lot of things we can be proud of in Denmark. We’re a small nation; we support each other and respect each other. I always look at film with great respect for the medium. It’s a miracle every time a film gets made. I never take it for granted.

Are you tempted to work in TV drama?
MZ: Yes definitely. I have a few things lined up. TV has taken over and changed for the best, allowing you to spend more time with the characters.

Will you direct the next Department Q film?
MZ: I don’t know yet.

What’s next?
MZ: I will do a smaller movie with Paprika Steen. It’s based on a play by Jakob Weis called Tove’s Room, about the relationship between the former editor in chief of Ekstra Bladet Victor Andreasen, and the major Danish author Tove Ditlevsen. It will be back to Cassavetes for me! I look forward to that.