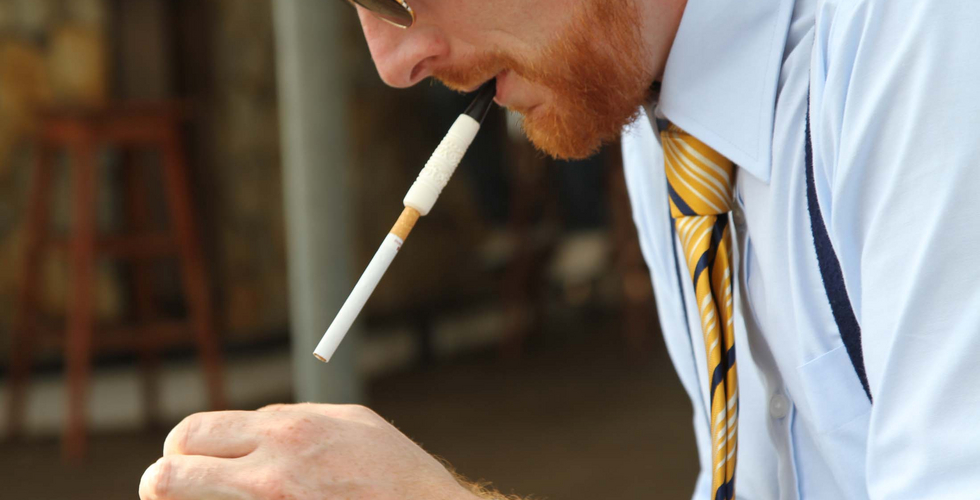 The genre-bending film follows the Denmark-based journalist and filmmaker as he acquires a diplomatic passport and becomes as a Liberian consul to the Central African Republic. His cover story is that he wants to employ local people to work in a new match factory, but he´s also investigating access to â€˜blood´ diamonds and corrupt power brokers and politicians in the broken country.

Brugger heightens the character of this diplomat by dressing in an outlandish style befitting a 1960s or 1970s European baron (complete with cigarette holder); he films much of the action via hidden cameras.

Denmark-based journalist and filmmaker Brugger also employed similar tactics in his 2010 Sundance winning documentary The Red Chapel, in which he visited North Korea under the guise of being a communist theatre director.

This is a crazy film. How did you even get this idea?

It began in 2007 when I stumbled upon these diplomatic title brokers. I thought if this were true, it would be a fascinating starting point for a documentary. For a long time I´ve been thinking about how to make a documentary about Africa and this would give me access to all the people you usually don´t meet in African documentaries - people who are in power, who enjoy privileged lifestyles.

And also since childhood I´ve had this psycho-infantile fascination with diplomacy as it was conducted off the beaten track. Since I was a young boy I read a lot of Graham Greene novels and a lot of comics like Tintin and The Phantom. I wanted to look at Africa as it was around 1960 or 1970 and I thought this would enable me to work with this fascination.

How did you navigate this film legally? Are there any chance of lawsuits from people in the film?

I´ve been informed that the Dutch title broker is very active in Amsterdam right now, he´s been trying to stop the screening of the film. I don´t know if he´s going to sue me but he said to IDFA that he´s speaking to lawyers already. But I really don´t know what will happen.

What about repercussions from the subjects in Africa?

[Diamond farmer] Mr. Gilbert is a member of parliament so he gets immunity because of that. What I like about the film is that 99% of the people in the film are crooks and villains and they are also crooks and villains who should be able to fight for themselves. Of course I think the film will have consequences for some of them. But the point of journalism and documentary films is to shine light on something you don´t normally get to see, and to expose hypocrisy and abuse of power in the higher echelons of a society.

With this film, do you see yourself as a journalist, a participant, an actor, a filmmaker - where does your role lie in all this?

That also confuses me from time to time. Part of the film is a conventional journalist project, like Alice chasing the white rabbits down the hole, where will this lead to?

The people that you meet when you pursue the ambition of becoming a diplomat. But another part of the film is about me exploring my own fetishisms.

Speaking of fetishisms, I was going to mention the boots.

Props are really important to me. I really worked a long time on finding the right boots. When Westerners meet Africans we have certain expectations about how they should look and appear and talk. But it goes the other way around, Africans also have dreams and fantasies and expectations about white Westerners. Normally they only get to meet these scruffy NGO people. I thought I could become the fantasy about the white diplomat businessman. There´s also a protection in that, if you try to blend in too much you become suspicious. By appearing as flamboyant as possible, they thought I had to be very rich and powerful.

You mention it in your voiceover that you are duping these pygmies who think they will get a job in your match factory. Did you have any guilt about that?

Of course it is morally repulsive. But at the same time, this is a country where the government has â€˜white years´ where the government is not able to pay any teachers. They´ve had that for eight years in a row. Nobody gets any education at all, that´s the fastest way of destroying a country.

Eventually I hope the film will get to the Central African Republic and it will make the pygmies understand why it is they will never get a job at a match factory. In a way maybe this will justify what I have been doing with them.

You filmed some with hidden cameras, but why were people not suspicious when you had a camera out in the open?

[Cinematographer] Johan [Stahl Winthereik] was using a small Canon digital camera and to Africans they don´t consider it to. At first I would tell them Johan was my press officer, but they didn´t care really, they thought he was just an idiot with a small camera... It´s a bit like going to the Galapagos Islands, nothing like this has ever been done before in the Central African Republic.

You must have been frightened at some points?

Because I involve myself so much, I start to believe my own story. Which is very foolish and naÃ¯ve but that is my way of surviving it. But actually when I was in Portugal to meet with the Evans brothers, that was the most uncomfortable experience because I wearing a body wire and if I had taken off my blazer it would have been seen. What is really troubling in the Central African Republic is something that everyone has to deal with, there are no normal laws and rules of causality. Situations are completely out of your control.

Are you nervous ahead of the premiere at IDFA?

The opening of IDFA is a fantastic thing, but at the same time I am a bit anxious that I have made a film which will get out of control. Especially when the film comes to France, in France the subject of the Central African Republic is really taboo. I really don´t know will happen.

Will you be wearing a lot of diamonds in Amsterdam?

I left all my diamonds behind. Which was good because when I flew out of Bangui the mining police were waiting for me in the customs area of the airport and greeted me by shouting, “Good morning, consul of Liberia, how many carats do you carry?” They didn´t open my hard-top case though. So in theory I could have taken them out of the country.