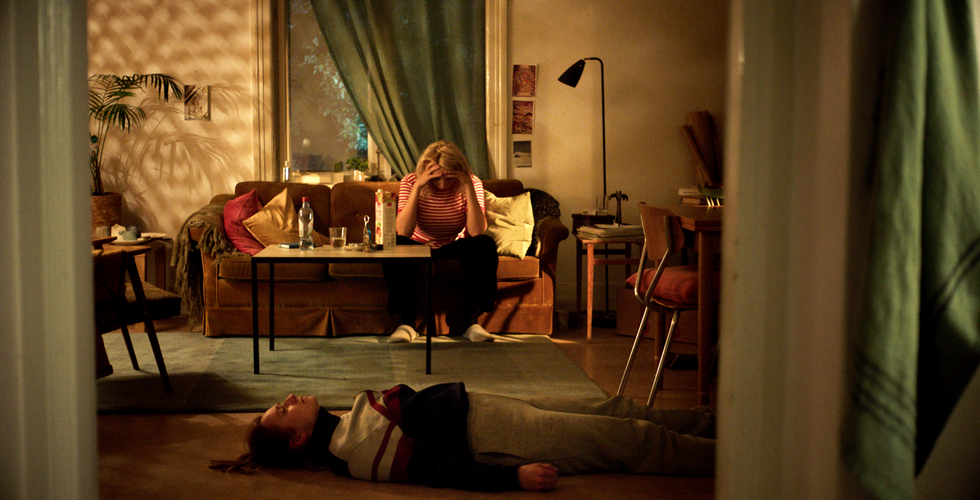 Berlin: Yngvild Sve Flikke's Norwegian pregnancy comedy is fresh, funny, and feminist, with the year's most unlikely animated hero at its heart.

It’s Rakel’s (Kristine Kujath Thorp) best friend and roommate Ingrid (Tora Christine Dietrichson) who first notices that something is amiss. Rakel is suddenly ravenous for fruit juice, averse to anything smelly, and she’s definitely gained some weight (mostly, Ingrid notes, in her boobs, which doesn’t seem so bad to Rakel). The twentysomething Norwegian pals like to have their fun, but Rakel seems particularly wild — an opening animation that maps out the girls’ apartment points to Ingrid’s pin-neat bedroom, compared to Rakel’s “trash-o-rama” room — but who cares? Rakel might be a little spacey and immature, but she’s only in charge of herself.  …Right?

By the time Rakel wises up to the reason behind her weight gain and weird cravings in Yngvild Sve Flikke’s wonderfully funny and warm “Ninjababy,” it’s far too late to do anything about it. Playing like something of a gender-swapped “Knocked Up” — imagine if it was Seth Rogen’s weed-smoking, shiftless Ben who was pregnant in Judd Apatow’s comedy, not Katherine Heigl’s straight-arrow achiever Alison, and you’ll get some sense of the film’s tone and Thorp’s charm — and complete with plenty of raunch to go with it, “Ninjababy” ably straddles the line between humor and heart.

Rakel’s initial panic is dulled only slightly by her belief that she’s just a few weeks along, after a particularly hot one night stand with the sweet Mos (Nader Khademi), who awkwardly re-enters her life after she and Ingrid sign up for a self-defense class, unaware that Mos is the teacher. Flikke’s clever humor (and Karen Gravås’ snappy editing) are on full display during that early, odd reunion, as both Rakel and Mos attempt to forget their evening of passion, even as flashbacks of it literally play out next to them. Flikke also continues to introduce animated additions, which will only become more detailed (and more emotional) as the film goes on.

Mostly, Rakel is concerned with a) getting rid of the fetus and b) possibly rekindling things with Mos, who “smells like butter” and inspires a charming animated list of pros and cons that makes his appeal pretty clear. But there’s plenty more going on here, and the film’s script, written by Flikke, Johan Fasting, and Inga Sætre, throws in a number of bits of misdirection early on, all the better to hammer home just how unprepared Rakel really is for the truth of her situation. With an abortion off the table, Rakel is suddenly faced with a litany of hard choices.

But while “Ninjababy” isn’t afraid to get deep — complete with some astute dissections of modern womanhood, many of them care of Ingrid and Rakel getting riled up and screaming it out at home, a decidedly honest depiction of how these chats tend to go down — Flikke is skilled at keeping things amusing. It’s cute, but not cutesy. Quirky, but not wacky. Mostly, it feels entirely populated with real people, and yet is still funny, no small feat in what could easily be an over-the-top comedic enterprise.

That handle on tone also helps Flikke’s most ambitious jump go down easily: animating the so-called Ninjababy (because he snuck into budding cartoonist Rakel’s womb, get it?) into a bandit mask-wearing figment of Rakel’s imagination, one who pops up at all sorts of inopportune times and gives literal voice to some of her biggest worries. Voiced by Norwegian actor Herman Tømmeraas, Ninjababy may only be a few lines on a page (or, when he gets moving, on a wall or under a bed or maybe even in Rakel’s heart), but he’s vivid and funny, and it’s no wonder Rakel can’t quite kick him.

As Rakel navigates the final weeks of her pregnancy, she comes into contact with an assorted cast of characters, from possible father “Dick Jesus” (so nick-named for his, well, endowments) and a handful of potential adoptive families. Her concern for Ninjababy’s future life hints at her growing attachment — can he not have rich parents? that could turn him into a jerk, she worries — even as she struggles to be honest about what she really wants out of life. The injection of so many other characters, however, often shifts too much focus away from Rakel, even if those sequences can be amusing.

Yet Flikke deftly ties all those strings together in the film’s warm-hearted final act, pulling close those seemingly scattered subplots into a conclusion that manages to be funny, sad, scary, and honest, just like “Ninjababy.” At every stage, Thorp delivers a winning, rich performance, finding nuance in a complex character, but never afraid to poke fun at Rakel, who is about to grow up, whether she likes it or not. Ninjababy might have snuck into her heart, and Flikke’s film seems poised to do the same for her very lucky audience.

“Ninjababy” had its international premiere at the 2021 Berlin International Film Festival. It is currently seeking U.S. distribution.